Some borrowed (with permission) thoughts on Governor McDonald's call to de-fund public broadcasting . . .

Martha note: Tom Graham sent me a link to the following editorial by Christina Nuckols published on PilotOnline.com. It's offered without comment from me, but I'd love to know what you think.

And if anyone can find (or would like to write) an editorial taking the opposing view, please send it to me and I'll print that as well. 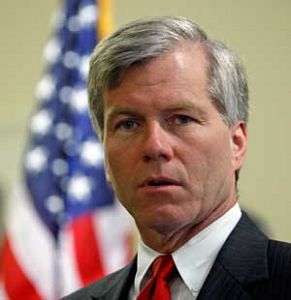 Public stations make an easy target for governor
Gov. Bob McDonnell was made for public broadcasting.

His speaking style doesn't lend itself to the 15-second sound bites that drive cable news shows. He's worn out several of my tape recorders over the years.

He's a policy wonk who can think past staff-generated talking points (if he wants to).

He's got a soothing National Public Radio voice like Scott Simon and Liane Hansen that turns the most acidic bad news into chamomile tea.

So why does McDonnell have it in for public radio and television?

No, this is not about Juan Williams. McDonnell tried earlier this year to phase out state support for public programming, before the political analyst was forced out at NPR, although I look for McDonnell and Williams to be chatting it up on Fox News any day now.

This is really just another of the Republican governor's predictable but gratuitous sops to his conservative base.

The governor tries to dress his budget cut as a serious effort to reprioritize spending programs.

But $4 million in savings, phased in over two years, won't do much to offset the $54 million in new economic development spending the governor wants this year or an additional $50 million for public universities.

The problem for McDonnell is he likes getting kudos for being a fiscal conservative, but he doesn't like all the wails and tears that come with cutting popular services. Snuffleup-agus is one of the few clean shots available, particularly since Senate Democrats are sure to restore the public broadcasting money anyway.

McDonnell never wanted to be the governor of gloom. He hoped he'd arrive in the executive mansion as the economy bottomed out so he could ride a glorious wave of recovery. Instead, he's facing another year of wallowing around in the shallows with unemployment stubbornly high and corporations reluctant to invest.

With only four years to carve out a legacy, McDonnell has been forced to tinker with the pension fund and push for billions in increased borrowing, both of which go against his cautious nature. He justifies those actions by promising to redefine what services are truly important and which ones taxpayers can't afford to continue.

The first part is easy. He wants more for higher education, mental health and job creation. All good goals. The harder question is what doesn't matter? The wishy-washy report from McDonnell's reform commission didn't yield many answers, so the governor is left to make another half-hearted raid on public broadcasting and then let legislators sort it out later.

McDonnell may not feel personally invested in public broadcasting, but it provides a public service by airing events such as his annual state of the commonwealth address, which is important but can't really compete with "Dancing with the Stars."

What if McDonnell gave a speech and nobody paid any attention? Has he thought about that?

"I'm not saying they don't provide a function of some value," he said last week.

Unless he's prepared to add a tango to his repertoire, he might want to give his budget priorities a second look.

Christina Nuckols is an editorial writer for The Virginian-Pilot. E-mail her at christina.nuckols@pilotonline.com.
Posted by Most of Martha Woodroof in one place at 8:22 AM