Martha note: Writer Devan Malore lives in Lexington, right beside the Maury River. His essays are heard regularly from atop the WMRA Civic Soapbox. 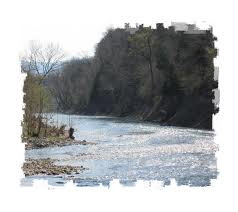 The locals, I’ve heard, have a mixed reaction to students returning to the college after Summer break.

“Spoiled rich kids,” some say, driving by off campus rental Cedar Houses the morning after a party.

Morning after party night, lines of parked SUVs, plastic cups and cans litter neatly mowed lawns along the same river I live on too.

But the college, services and jobs associated with education is also a major source of income in this community. In these hard times the city struggles like many. It’s a fine line between loving, welcoming and trying to discipline mostly out of state students.

I lowered a kayak down the steep slippery river bank trying not to be seen by new student renters. A three party night, I thought, floating by first the Lake House, renovated Cottage, then middle Cedar House. Smoke rose from the grill on the deck as loud students almost touched shoulders.

Leaves still Summer green drifted across the calm water signaling an inevitable coming of Fall and more parties. I looked up searching for early bats, hawks, the elusive Blue Heron often perched in a tree. After five minute paddling party tunes could not be heard on the river.

I hugged the shore studying reflections of sycamore branches on river and mirror image of light blue almost pink sky turning to night. Eyes searched among the leaves for the familiar glow returning with students. I fixed on the object and paddled straight for it. The boat hit the metal pushed it aside, my paddle pounding the water trying to pull it in. Reached into the warm water I grabbed the can and emptied water back into the river. Natural, Lite read the familiar blue and silver can. Sound of a compressed can echoed on the river as it was stuffed behind the boat seat with a collection of cans and bottles.

Ahead to the right another can bobbed among leaves and I headed for it. Missing the can be a foot I reached out with the paddle furiously trying to pull it in. The can bobbed and moved as if it were a fish not easily caught. After a sharp turn, more beating of the water, the can turned on it’s side, made a gurgling sound and began to sink. I reached down to grab it but the can sank quickly, disappearing into murky depths. Over head, bats were beginning to feed on night insects.

A three party night. How many beer cans and water bottles will sink to the bottom, I wondered? Then the river rises, a great journey begins, carrying everything back to the sea. Some cans and bottles hopefully never make it. Maybe a child looking for shells or an old fisherman will feel something that calls out a reminder of things not belonging in a river. Maybe a woman will show her lover the find and ask he carry it back, helping clean up, “our spot.”

I leaned right, turning the kayak, headed down river toward the music of a three party night.

Natural. Lite. And sinking. Will we buy anything colorful, cheap, labeled Natural and Lite? Is it better to let things sink to the depths where we cannot see, don’t have to deal with what remains after getting what we want?

Bats flew wildly overhead and disappearing light made it easier to spot the cans and bottles of a three party night on the river. Some of us have unusual jobs in unusual places during these unusual times, I remembered.
Posted by Most of Martha Woodroof in one place at 8:16 AM